The wiring is the same as the previous UVC example.

Next, type in the linux computer: nc -l 5001 > my_jpeg_file.jpeg
This command will wait until socket close or some problem occurs.

In this example, we use Ameba to send an image to receiver and close the socket.
Compile and upload the sample to Ameba and press reset button.
After the connection is established, Ameba sends an image to receiver. Then the “Fail to connect” message appears, this means the example ends successfully. 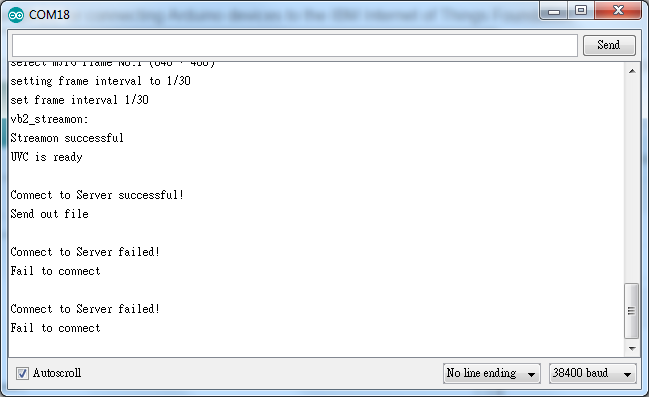 At the same time, the nc command at the linux side has ended. In the working directory of the linux terminal, you can find the received image “my_jpeg_file”. If you type the nc command again, you will receive the file again, since Ameba tried to send the image every second.

We specify “JPEG_CAPTURE” in the last argument of UVC begin(), in this way we can catch the camera packets without enabling RTSP service.
UVC.begin(UVC_MJPEG, 640, 480, 30, 0, JPEG_CAPTURE);

In loop(), save the JPEG to predefined jpegbuf:
int len = UVC.getJPEG(jpegbuf);

Then sends the jpegbuf via TCP.